Fiber Over Copper And Identifying The Tipping Point

Fiber Over Copper And Identifying The Tipping Point

Fiber optics has slowly but surely risen to a position of dominance in commercial telecommunications thanks to the numerous advantages they offer over traditional copper wires. One tiny pair of fibers can now carry more conversations than thousands of copper pairs. They can stretch hundreds of miles between repeaters – and those repeaters can be entirely optical. Thanks to advancing technology, fiber now has the edge over copper in space, reliability and every aspect of cost – materials, installation, and modification.

Using fiber for CATV pays dividends thanks to its wider array of enhancement options and its greater reliability. With a traditional broadcast network, huge numbers of repeaters are required – and that translates in huge numbers of potential failure points. A CATV system is organized with “tree and branch” structure; this means every upstream failure blocks service to multiple users downstream. Reliability is especially important here because viewers expect constant uptime. CATV operators also appreciate the capability to offer internet access along with their television offerings.

In pure data applications, the choice between fiber and copper is a little more complex. For low-bitrate transmissions over short distances, copper wires still perform better. Once distances pass 100 meters and speeds go over 1 Gb/s, though, fiber begins to beat out copper. Fiber offers an inherent bandwidth advantage. The comparatively high power consumption of copper links (four to eight times more than fiber at high speeds) and their latency are also potential problems. The question of long-term upgradeability usually puts fiber in the lead. Optical fibers have already proven to last longer than multiple generations of copper. Installing fiber (especially laser-optimized) is always a sound long-term investment.

For some applications, fiber is simply a necessity. In industrial environments (e.g. factories), electrical interference can make copper wiring impractical. Reliable communications in such environments already rely on glass and plastic fibers. Long-distance links for CCTV systems are overwhelmingly made with fiber today. In general, fiber is the preferred choice whenever reliability is a high priority.

Many of the advantages fiber has to offer come from the fundamental physics that distinguish it from copper. It transmits data with photons rather than electrons. Glass offers less attenuation than copper and optical signal frequency is less of an issue than electrical frequency. Optical transmissions aren’t susceptible to interference and they don’t radiate RFI. This gives fiber significant and innate security advantages.

Copper wires can radiate enough energy to interfere with other equipment. Fiber, in contrast, radiates nothing. Utility providers even bundle fibers for communication in the same wires that they use to distribute power!

Despite all the other advantages, fiber most often wins out thanks to its superior bandwidth and distance performance. Multimode fiber can deliver 100-1000 Mb/s for communications applications, with extension up to 10 Gb/s. If fiber is installed in single mode, bandwidth becomes practically unlimited. This is particularly true in systems set up for dense wavelength division multiplexing (DWDM). 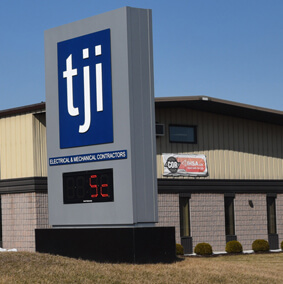 Tee Jay has a well equipped shop facility with over 10,000 sq ft of office and shop space, complimented by a full staff. The shop is fully equipped and used for all our fabrication needs.